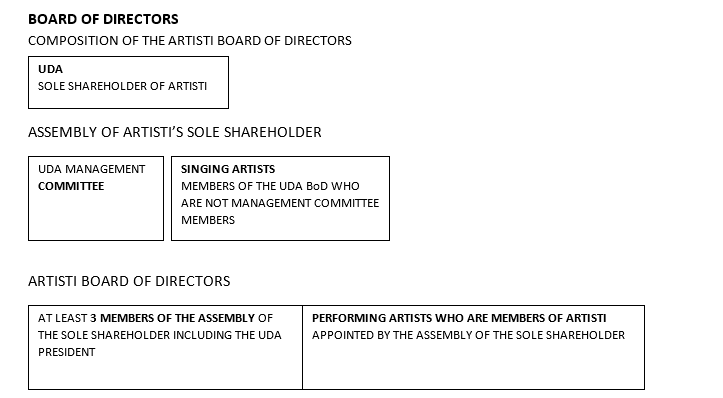 News from the Artisti Board of Directors

In the spring, we informed you that the sole shareholder of Artisti had appointed France D’Amour as Chairperson of Artisti’s Board of Directors, in line with the recommendation of our society’s directors. In addition to France, though, the Artisti Board of Directors consists of ten other directors, at least three of whom must be members of the assembly of Artisti’s sole shareholder. One of those three positions is reserved for the president of the Union des artistes (UDA), who acts as vice-chair of Artisti.

If you are wondering how Artisti directors are appointed, the chart below shows Artisti’s organizational structure and the appointment process:

The re-election of Sophie Prégent as president of UDA has allowed for continuity in the position of vice-chair at Artisti. The other two positions reserved for UDA directors are held by Marie Claude Arpin (as a singer representative) and Tania Kontoyanni (as a member of the UDA management committee). Happily, these three people are also members of Artisti and thus have a good grasp of the issues.

The other Artisti directors are appointed by the assembly of Artisti’s sole shareholder, usually based on recommendations from Artisti’s board of directors.

Last April, directors Sébastien Boucher, David Bussières, France D’Amour, Sébastien Lacombe and Ghislain Poirier completed their mandates. As they had all expressed an interest in renewing their involvement as Artisti directors for an additional two-year term, they were reappointed by the assembly of the sole shareholder to continue their pursuit of Artisti’s objectives alongside the other directors.

Had any of the directors completing their terms chosen not to extend their mandate, Artisti would have solicited applications or considered other individuals expressing an interest.

Remember, as a member you can submit an application at any time, either to fill a position vacated by a director before the end of his or her term or to get involved with the society in other ways, such as by becoming part of one of its work committees! Simply indicate your interest by filling out the form on the Artisti website (https://www.artisti.ca/en/about/#getinvolved).

Categories: Board of directors / Information / Voice of the Chairperson
Share: